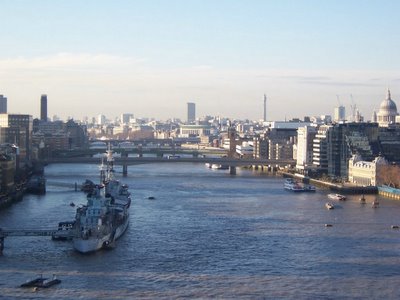 Continuing with more London Photos.
River Thames is the lifeline of London, just like Ganga is for Varanasi or Cauvery for Trichy. It is what made London a maritime city and much of London's history has flown by along the river. Unlike Indian cities, however, there are numerous bridges across the river to make crossing the river just a little easier. Here's one shot of the river and some of bridges as seen from the "Tower Bridge', the most famous one.

Moving on to Tamilian things,

The TN political scene is getting even more interesting by the day. With the overwhelming advantage of DPA kind of floundering a little (at least as per some media reports), the coalition scene is getting more important and curiouser. While Kalignjer has managed to keep his flock intact as yet, the seat negotiations are bound to cause some issues. While Amma is waiting with open hands to embrace anyone willing to come out, I am waiting to see the how those who jump ship try to justify their actions, which I am sure will make us LOL. Already, actor Radharavi has made several stupid statements, including saying the TN (ADMK) women may not be that sad for losing their husband because Amma is providing a grant of 50,000/-

La affaire Khushboo and Maxim, after being at the receiving end of manufactured public ire, I am thinking she is trying to play a victim. Somehow, I dont feel much sympathy, especially after rejecting Maxim's reasonable and serious attempts for a settlement and her demanding 3 Crore damages.

S, whom do u think will win this time? my guess is that it will be a close race with odds favouring Amma!

Hi.. thanks very much for dropping by. Good to hear about another Indian in London.

Had a quick glance at your previous photos.. very simple and neat. Keep them coming!

Ashok, I think it will be a close race with DMK alliance slightly more favorite, but it all depends on the alliances at the last minute.
Chakra: Thanks for the visit and comments. I thought my photos were great :)

A very passionate lover of Chennai